Grayson Allen has gone from star point guard to one of the most hated college basketball players in the country. Allen has always been followed by the media dating back to his early high school years at Providence High School in Charlotte, North Carolina. Allen was ranked 21st in the class of 2014, receiving 14 Division-I scholarship offers. Allen would make the easy decision of staying close to home and playing behind arguably the greatest college basketball coach of all-time, coach Mike Krzyzewski.

He would prove his worth at the next level playing in all 35 of the team’s games and averaging just under 5 points per game, with an incredible field goalpercentage from behind the arc. He would see his fame skyrocket the next season, only to be taken away weeks later! Allen’s minutes would rise from 9 to 36, his Points Per Game average (PPG) would jump from 4.4 to 21.6, and his three point percentage to an even better 41.7%.

Grayson Allen would soon lose the fame and the respect after he blatantly disrespected the players, coaches, and the overall game of basketball. On February 8, 2016, Allen’s image in the eyes of millions would change for the worse. Grayson Allen was caught clearly tripping Louisville forward Ray Spalding late in the second half of a conference game. Allen was assessed both a personal and flagrant foul. 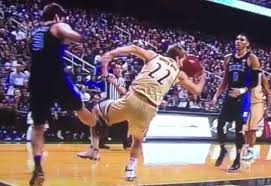 Two weeks later on February 26, Allen would be caught in the act once again. Grayson blatantly tripped Xavier Mayes of Florida State with 5 seconds remaining in the game, a game that the Duke Blue Devils dominated the entire way, never letting the Seminoles within 10 points after the first few minutes. Allen would not receive any punishment, but the tripping did not go unnoticed.

“I never liked Grayson Allen! He plays with way too much cockiness and always has an arrogant look on his face, the tripping just makes me hate him more,” stated junior Joey Krall.

ESPN and many other sports media outlets would jump all over the chance to interview Allen, Coach K, and other college basketball players regarding the incidents. Grayson Allen and Coach K were both featured in an “E60” documentary where Allen would emotionally apologize and speak on his actions following being thrown out of a game due to his third “official” trip in the calendar year.

“JJ Reddick is a Duke star very similar to Grayson Allen. A guy that went through a lot of the stuff that Grayson Allen went through. Yes being white, and being able to ball like they can ball, you are gonna have people that come at you in a negative way!” stated ESPN commentator Stephen A Smith.

When asked if Grayson Allen should finally be suspended, FOX Sports analyst Chris Broussard said, “What we need to do is find out if he is just straight up a dirty player, or if he has emotional issues.” Soon after, Grayson Allen finally did receive a one game suspension for his actions; however, the suspension was not from the NCAA, instead it was given by Coach K and the Duke basketball administration. Then came the haters, and the fans, and the commentators.

“One game? That’s all that he gets? He deserves a 5 or 6 game suspension! He is coach K’s favorite and always has been, the league needs to take action,” exclaimed senior  Cole Waldhausen.

Donald Friday added, “Grayson Allen competes and that’s what makes him a great player. He will do anything to win a game, which unfortunately is why people are so tough on his type of play, because you don’t see players like that everyday!”

Currently, Allen has found his way back onto the starting line-up competing to get to the Final Four in March.

Below is a tripping compilation. You decide for yourself what Allen deserves.